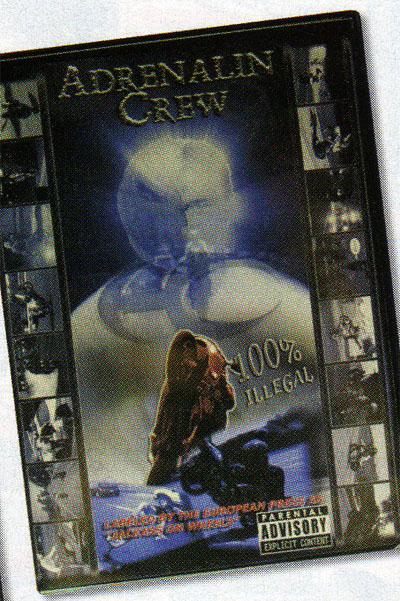 Derived from a 2002 Pay Per View special called “Introduction to Street Bike Insanity,” the Adrenalin Crew’s eponymous DVD introduces the AC riders, a talented bunch who can ride and stunt with the best out there while making you bust a gut laughing. Aimed at more of a crossover audience than the typical stunt videos, Adrenalin Crew features significantly more humor, jackass-type stunts and, yes, breastesses then most videos. Yes sir! Cut and shipped throughout the same-old illegal street stunting and street racing scenes are plenty of our favorite silicone-assisted twins. Adrenalin indeed! In addition to tricking, it appears they want to be comedians as mush as they want to stunt. For the most part, the Adrenalin Crew succeeds in this goal. Genuinely funny is a voice over commentary after one Crew member gets pulled over by a policeman three seconds into a race with two Ferrari’s. Unfortunately, the inclusion of the character Randy- a parody of a redneck doing stunts on a farm tractor–is not. Also we could do without vomiting on camera and playing with fireworks. Stick closer to the stunting, fellas, which, highlighted by AC rider Crazy Martin’s insane no-handed ankle stoppies, is impressive enough.