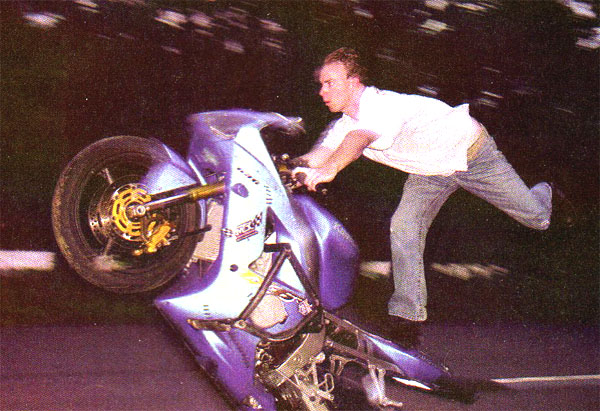 Motorcycle stunt rider Greg McGlynn’s mom figures he’ll grow out of it, this infatuation with death-deflying tricks aboard a motorcycle whipping down a street at 80 MPH. “She doesn’t understand why I do this,” the 25-year old single thrill seeker told AXCESS. “But what makes me really happy is learning a new trick.”

During the week, McGlynn is a European car mechanic, specializing in Saabs and Volvos, with a smattering of Volkswagen’s thrown in to keep his mechanic skills sharp. But three times a week after work, for an average of 4 hours a night, he hones his riding skills aboard a 2003 Kawasaki 636 or his 1995 Honda 900RR.

“I don’t have health insurance,” he concedes, a fact that undoubtedly adds to his mom’s concern over her sons’ daring-do. “But I’m pretty lucky. I’ve only been injured seriously once.” Not a bad win-loss average for someone that took up the sport 4 years ago. “I was doing a ‘High Chair Endo’ where you sit on the gas tank and hang your legs over the bike’s wind screen, when the bike stalled,” he said. “I did a Superman dive off the front and the bike rolled over the top of me. The contusions almost paralyzed me.”
“For a week I hurt so much. I couldn’t even walk,” he recalls. “But after a week, I just had to start riding again.” His favorite move? “It’s called ‘Spreader Scrape’ where the bike is totally vertical and you actually drag the tail of the bike along the road.”
Practice, practice, practice. Heck, who needs health insurance when you have McGlynn’s kind of luck and skill.
One day, this Hartford, Connecticut-native hopes to turn pro in his sport. In the interim, he and his team appear in a new motorcycle stunt movie by Tod Colbert called Judgment Day 3, The DVD features 10 freestyle stunt teams, including McGlynn and his Connecticut friends doing circle wheelies and much more. You can download a trailer of the film or buy a DVD at (defunct address). There are no ramps and no hills in this sport, just a straightaway that is smooth and quick. 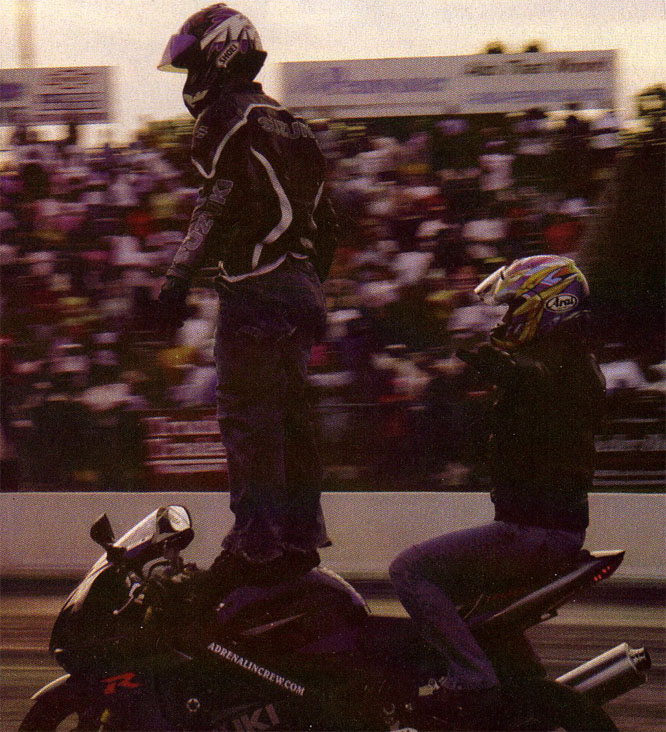 So what’s McGlynn’s secret to his success in this crazy sport? “It takes a very long time to learn where your balance point is,” he said. Once you know that, you’ll do great!” 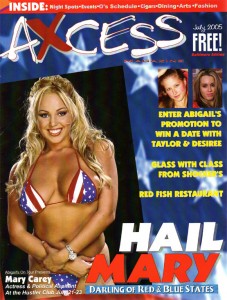