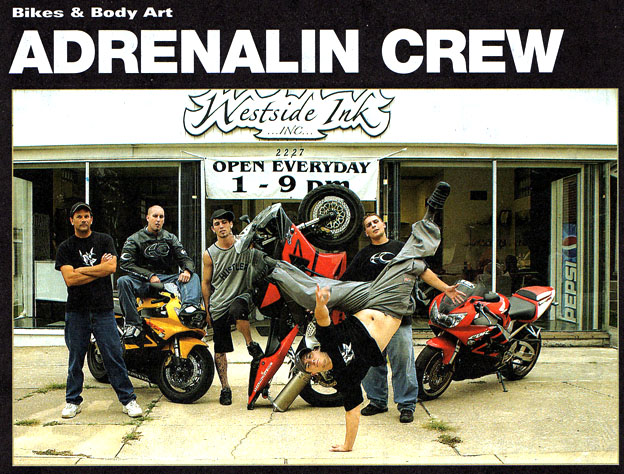 Adrenalin Crew 100% Illegal (Director’s Cut), is a new daring DVD was released through Warner Music Group September 27h that brought professional tattooists with it. Adrenalin Crew is a documentary on motorcycle stunt riding and the lifestyle surrounding it. Not your typical biker flick these guys are on street bikes doing wheelies and all other sorts of insane tricks like riding backwards and standing on the gas tank. In addition to the street motorcycle stunting, Adrenalin Crew includes just about anything that you were told not to do growing up.  The founder of Adrenalin Crew, Kenny Kelley, started out as a Hollywood stuntman who decided to venture out on his own to show how real thse4s things you saw in movies really are. Some of the starts of Adrenalin Crew have performed stunts for many Hollywood productions including the movies Biker Boyz and Torque, and have been featured on Playboy TV, HBO and beyond. 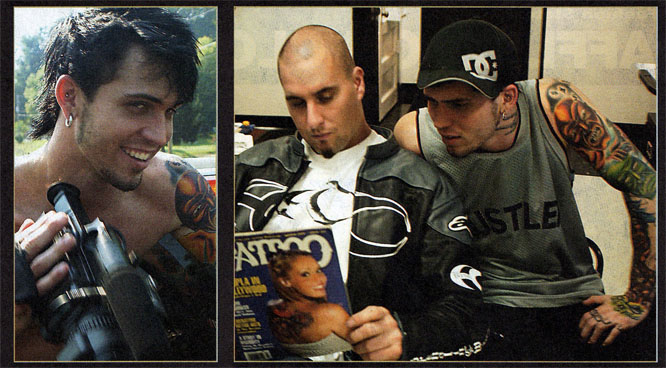 Nicknamed “Jackass on wheels” by the European press, Adrenalin Crew includes a segment showing tattoo artists Dan Lins Jr and Eric Willis from Westside Ink (neither work there anymore) in York Pennsylvania, and displays their completed tattoos on the members of Adrenalin Crew. Dan and Willis live in an apartment above the tattoo shop. Willis has tattooed for six years and specializes in realism and portraits. Dan has been tattooing for four years and likes to tat macabre scenes. “They are young, determined, rider street bikes and love to party” Kenny said on why they decided to go with West Side Ink. 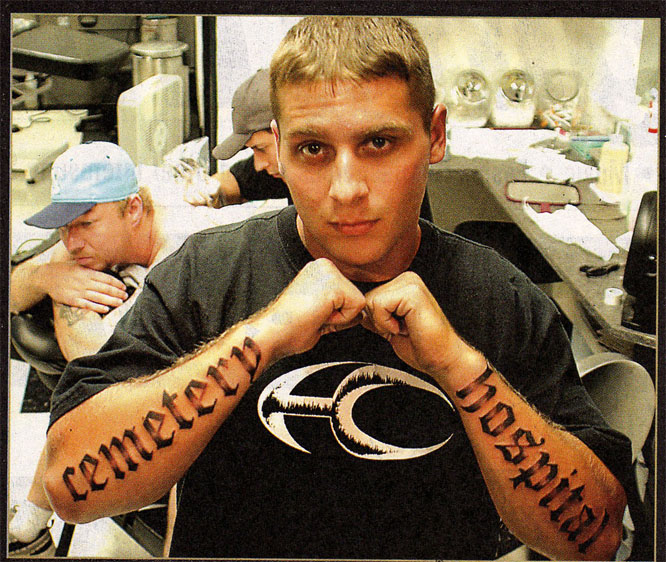 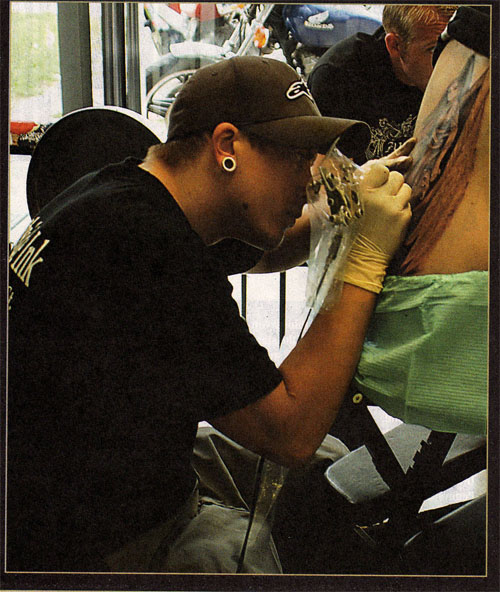 As to why tattoos should be included Kenny notes “I used to always watch the Pantera home vide3os it showed a segment of people getting tattoos and I thought people would get a kick out of it. I had no idea so many people would be down for it, though, we still get emails asking if we still need people to get AC tats!”

The first to be tattooed in 100% Illegal (Director’s Cut) is an Adrenalin Crew fan Phillip Shaffer–the first person to ever receive an AC tattoo, which was an AC symbol torn into ripped flesh. Watching him cry from different angles and never growing accustomed to the tickle of the needle as Dan tattoos is amusing. Adrenalin Crew camera operator Dan #2 DelGrosso stepped up to the plate next as Willis gave him the AC logo which gave the impression of smoking. Adrenalin Crew soundtrack musician Marc Levin was next and Willis conjured up an hourglass with logo in the bottom, hand scratching at the glass on top.

Tommy, who is lucky to be alive after jumping his Suzuki GSXR 1000 off of Travis Pastrana’s foam pit, also 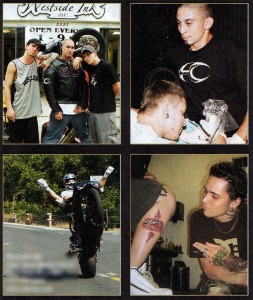 was tattooed. In the movie you see him over shoot the foam pit landing on his ankles after rising 60 feet in the air. Another fan, Bobby, received an AC logo which had the AC signature half-helmet half-skull. “Reckless Steve” Pullman of Adrenalin Crew got a “Your Name” tattoo. Last to get one was Kenny’s assistant John Flaherty whose virgin skin now houses the Adrenalin Crew logo down his right forearm. “TIT was the best thing I’ve done in a long time, I can’t stop looking at it” John exclaims, “I want full sleeves done by next year.” The sequel promises to expand upon these ideas, and will include fan’s full back murals, sleeves and more based on the infamous AC symbol design.

Westside Ink Inc, was formed in December of 2004, and is manned by Todd, Eric Willis, Dan Lins Jr, and Matty, with collective 15 years of experience tattooing and piercing. “The state of Pennsylvania does not regulate the tattoo industry,” said Todd, “so we deiced to up the standards in our area. We are members of the APT (Alliance of Professional Tattooists), which is an organization that has been around for 13 years and they were formed to keep tattoo shops that belong to the organization abreast of all modern techniques and safety concerning all airborne pathogens, diseases, ect. We wanted people to be able to come in, be safe, and get a professional tattoo at a very competitive price. I think we’ve accomplished that, I really do. 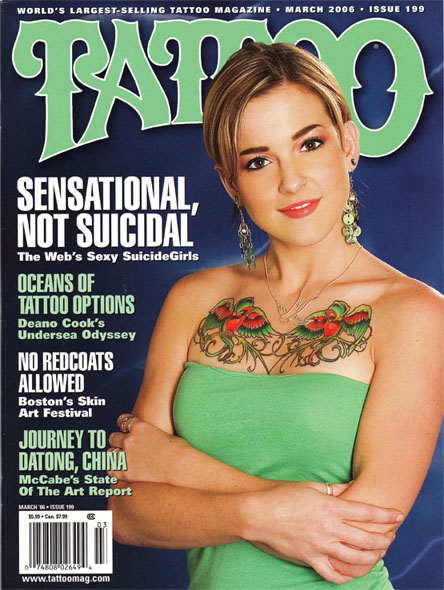 “We want people to be safe and get a good tattoo at a good price,. We want to be more user friendly–we want anybody to feel welcome here. I want people to be entertained while they’re here, we’ve got entertainment from all angles==if the work itself isn’t enough, we;ve got the high resolution projection system for the wall, we can watch moves on multiple televisions and sound systems. Now that we’re hooked up with Adrenalin Crew people come to watch these guys tear it up outside our shop on their motorcycles, it just works out for everyone, and everyone enjoys themselves.”