A lot of people like to blame crotch rockets and their usual young adrenaline junkie for being an asshole flying down the street at break neck speeds and doing the occasional wheelie or other such antic.  The truth is and I hope its not only people who agree with me reading this but people who disagree, is that it did NOT start with street bikes!  Motorcycle videos that show motorcycle stunts date back to the beginning of video, and my friend, there was no Suzuki GSXR 1000, no CBR 954, no Kawasaki 636 or Honda F4i.

On New Year’s Eve Day, 1967, Evil Knievel,  jumped his motorcycle 151 feet over the fountains at Caesars Palace in Las Vegas. Nevada to a crowd of 15,000 people.  It wasn’t till the motorcycle video aired that millions watched it again and again on TV. There are also some great old movies featuring real members of the Hells Angels as well.   Motorcycle police have also been big into stunting and some motorcycle bikers still perform live. 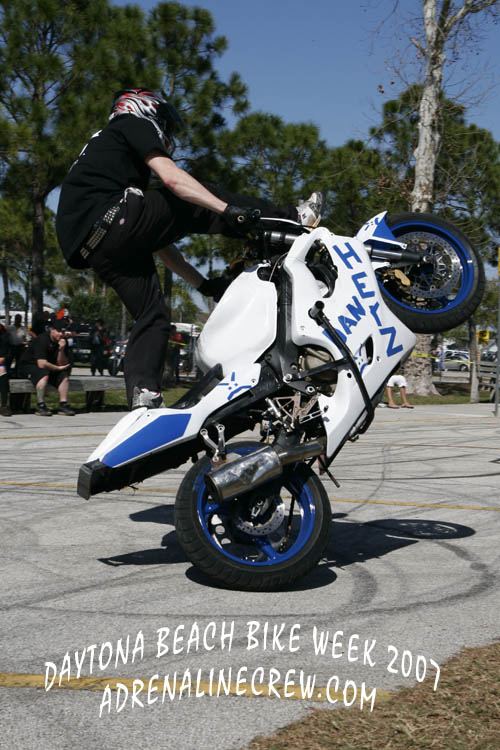 featuring dare devil type stunts were not started by us, on the flip side, we are not mimic anyone either.  We are opening the doors as we come to them and trying each time to take it to the next level.

Motorcycle videos are common on Youtube these days and with movies like Biker Boyz and Torque, both of which Adrenaline Crew was hired to do motorcycle stunt work, we do not fall out of the mainstreams eye.

As Adrenaline Crew we have hosted 3 mainstream releases, a TV show in Europe called Urban Stunt Bikers as well as seen in over 40 magazines and equal coverage on TV.  Sport bikes are just getting faster, and our crew is getting more daring, these bike videos are not going anywhere, and the point of all this is to let you know, we didn’t start it and we sure as hell can’t finish it.

Here is the first DVD we did, this was when there was no motorcycle videos for crotch rockets, and we were glad to help bust down the door for this “sport”.

Here is the second installment that we sell, it is also avaiblie in stores or at www.adrenalinecrew.com.

And of course Adrenaline Crew 3, the documentary on the Crew.