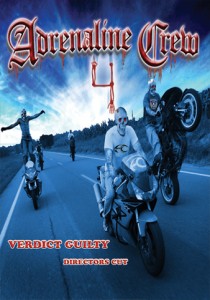 It seems like it was almost over, the carnage the Crew had created cost them their vehicles, their licenses, their freedom and almost their lives.  Now after the smoke clears and the probation is lifted Kenny Kelley and the Crew are back where they left off, doing real live stunts on our nations roadways.  These real action dare devils have no permits, aren’t part of a union, just on pure Adrenaline while terrorizing the streets of America!

The Adrenaline Crew know the outcome of their destruction, they know the price they will have to pay, but its all worth it for your entertainment here on AC 4 “Verdict Guilty”.

The new Director’s Cut Edition sold on Adrenaline Crew.com gets rid of the censorship and also includes new menus and bonus scenes, and more features footage!

This movie was filmed in High Definition filmed across the streets of America, no one was harmed during the filming of this movie aside from everyone in the movie.