Adrenaline Crew 3 “The Road Behind”

Pictures from the documentary, Adrenaline Crew 3 “The Road Behind” (Directors Cut Edition) 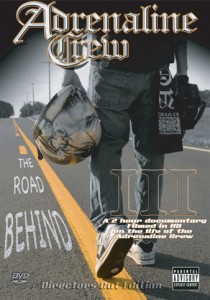 As Kenny and the Crew pay their debt to society, we received the green light to finish their next project.

This 2 hour DVD documents features the last 2 years of AC, their troubles with the law and the don’t give a hell attitude that got them to where they are now.  Follow them as they go on tour trying to make Adrenaline Crew a house hold name.

This movie starts as Kenny’s lawyer John Kudel is leaving the court room and explains they need to stay OUT of trouble, now the Crew makes every attempt to sabotage their freedom, their vehicles and their lives, here on The Road Behind.

The Directors Cut Edition which is only sold here features over an hour of new footage, bonus and deletes tracks that were edited out of the first DVD!
You will enjoy the tour and see how much pain sweat and fun times went into the making of the Adrenaline Crew.