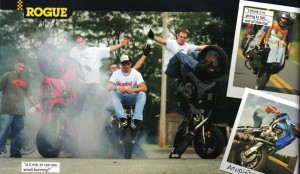 Wooooooh! The sound of the Antichrist – Old Bill sirens – blasts out at deafening volume over the wail of our screaming bikes. I’m doing 100pmh down a US highway on my borrowed bike, which is good enough for a stretch of Yankee porridge if the cops are in a bad mood. Worse the geezer next to me is practically buried: he’s going even faster then me and doing a wheelie. While standing on his seat. As they say round these parts: we’re in deep shit and we ain’t got no paddle.

Loaded is in downtown Washington DC with the baddest motorbike gang in the states- the world famous Adrenalin Crew. These are the boys who pulled most of the insane stunts in movies like Torque and Bikerboyz and they’ve made tearing up the streets of America and pissing off the rossers an art form.

The Crew have been boozing, scrapping, riding and shagging for nearly five years – and scrapes 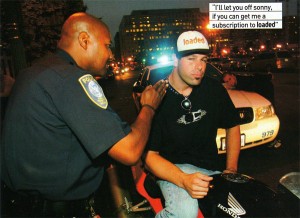 with the law are common when you’re pulling off stunts like five man stoppies (flying along balanced on the front wheel with four passengers on the bike) and lunatic wheelies through fag-paper gaps in rush our traffic. While standing up.

In a nutshell, they’re Jackass on bike fucking bikes. They hit the big time when their TV show, Introduction To Street Bike Insanity was shown on US TV during the summer of 2003. If you’re an adrenalin junkie, biker or just an average Joe who has an appetite for watching mayhem at other peoples experience, you will fall in love with the Adrenalin Crew.

These boys can manipulate a 400lb bike like it’s a BMX, making them do things that shouldn’t really be possible. Highspeed motorway wheelies at double the 65mph speed limit on American highways? Easy. Gut wrenching crashes are occupational hazards. As are fighting off great queues of ladies who like nothing more then flashing their ares at cops while riding pillion. And everywhere we go, pedestrians scatter like ants as the Crew’s howling menace hits town. 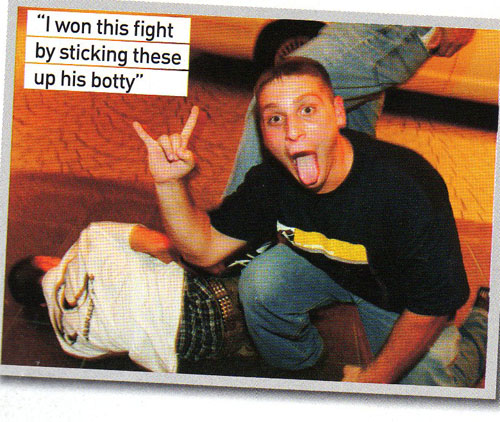 “Most of the time the police throw the lights on and pull out, but we don’t wait around for them to catch up,” says the Crew’s leader, Ken Kelly. “One time we couldn’t get away though- I had flipped a highcair wheelie (flying along on the back wheel while causally sat with legs over the front screen) on the freeway and the bike was destroyed. We were being followed by a police helicopter and a roadblock had been set up, so we didn’t have much of a chance o get away that time. The court hearings are coming up soon. That kinda sucks”.
Ken might be up before the Beak sooner then he thinks. He’s the fella who’s standing on the bike seat and this time the cops are onto the Crew- we’re greeted a mile further down the road by a roadblock of flashing lights. 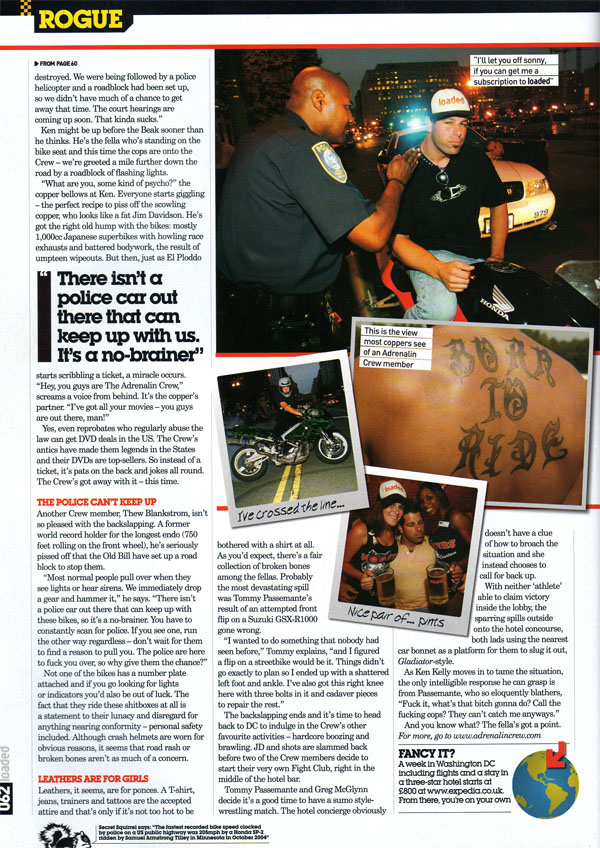 “What are you, some kind of psycho?” the copper bellows at Ken. Everyone stars giggling-the perfect recipe to piss of the scowling copper, who looks like a fat Jim Davidson. He’s got the right old hump with these bikes: mostly 1,000cc Japanese superbikes with howling race exhausts and battered bodywork, the result of umpteen wipe outs. But then, just as El Ploddo starts scribbling a ticket, a miracle occurs. “Hey, you guys are The Adrenalin Crew.” screams a voice from behind. It’s the copper’s partner. “I’ve got all your movies – you guys are out there man!”
Yes, even reprobates who regularly abuse the law can get DVD deals in the US. The Crew’s antics have made them legends in the States and their DVD’s are top sellers. So instead of a ticker, it’s pats on the back and jokes all round. The Crew’s got away with it – this time.

The Police can’t keep up

Another Adrenalin Crew member, Thew Blankstrom, isn’t so pleased with the backslapping. A former world record holder for the longest endo (750 feet rolling on the front wheel). he’s seriously pissed off that the Old Bill have set up a road block to stop them.

“Most normal people pull over when they see lights or hear sirens. We immediately drop a gear and hammer it,” he says. There isn’t a police car out there that can keep up with these bikes, so it’s a no-brainier. You have to constantly scan for police. If you see on, run the other way regardless – don’t wait for them to find a reason to pull you. The police are here to fuck you over, so whey give them the chance?”

Not one of the bikes has a number plate attached and if you go looking for lights or indicators you’d also be out of luck. The fact that they ride these shitboxes at all is a statement to their lunacy and disregard for anything nearing conformity – person safety included. Although crash helmets are word for obvious reasons, it seems that road rash or broken bones aren’t as much of a concern.

Leathers are for girls 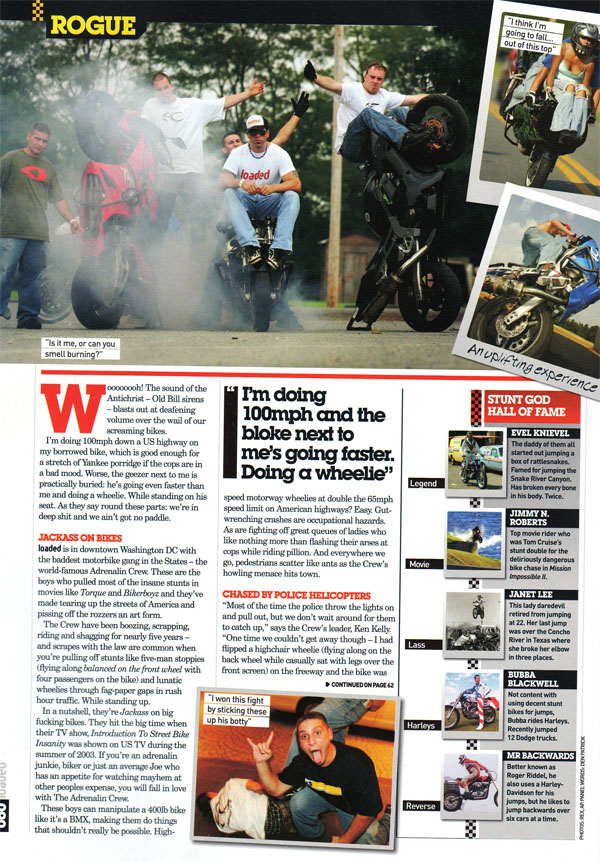 Leathers, it seems, are for ponces. A T-shirt, jeans, trainers and tattoos are the accepted attire and that’s only if it’s not too hot to be bothered with a shirt at all. As you’d expect, there’s a fair collection of broken bones among the fellas. Probably the most devastating spill was Tommy Passemante’s result of attempted front flip on a Suzuki GSX-R1000 gone wrong.
“I wanted to do something that nobody had seen before,” Tommy explains, “and I figured a flip on a street bike would be in. Things didn’t go exactly to plan so I ended up with a shattered left foot and ankle. I’ve also go this right knee here with three bolts in it and cadaver pieces to repaid the rest.”

The backslapping ends and it’s time to head back to DC to indulge n the Crew’s other favorite act ivies – hardcore boozing and brawling. JD and shots are slammed back before two of the Crew members decide to star their very own Fight Club, right in the middle of the Hotel Bar.

Tommy Passemante (Street Bike Tommy) and Reckless Steve decide it’s a good time to have a sumo style wrestling match. The hotel concierge obviously doesn’t have a clue of how to broach the situation and she instead chooses to call for back up. With neither ‘athlete’ able to claim victory inside the lobby, the sparring spills outside onto the hotel concourse, both lads using the nearest car bonnet as a platform for them to slug it out, Gladiator-style. 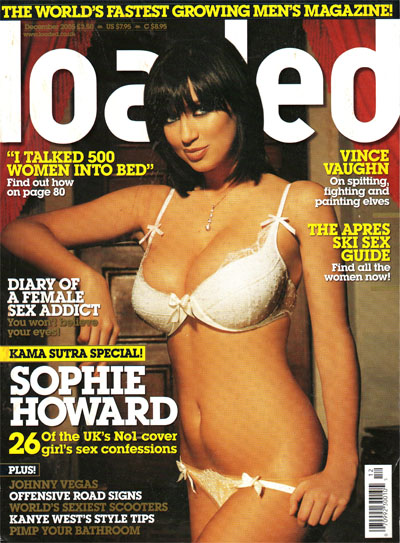 As Ken Kelly moves in to tame the situation, the only intelligible response he can grasp is from Passemante, who so eloquently blathers, “Fuck it, what’s that bitch gonna do? Call the Fucking cops? They can’t catch me anyways.” And you know what? The fella’s got a point. 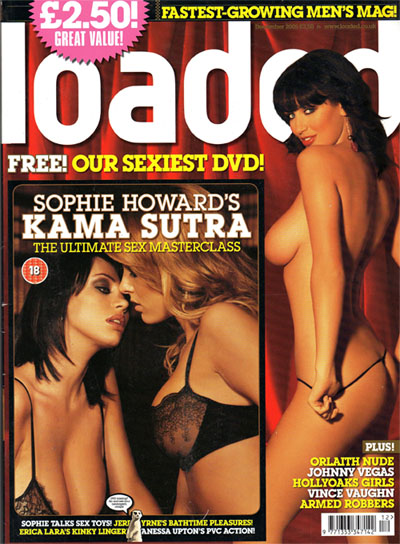