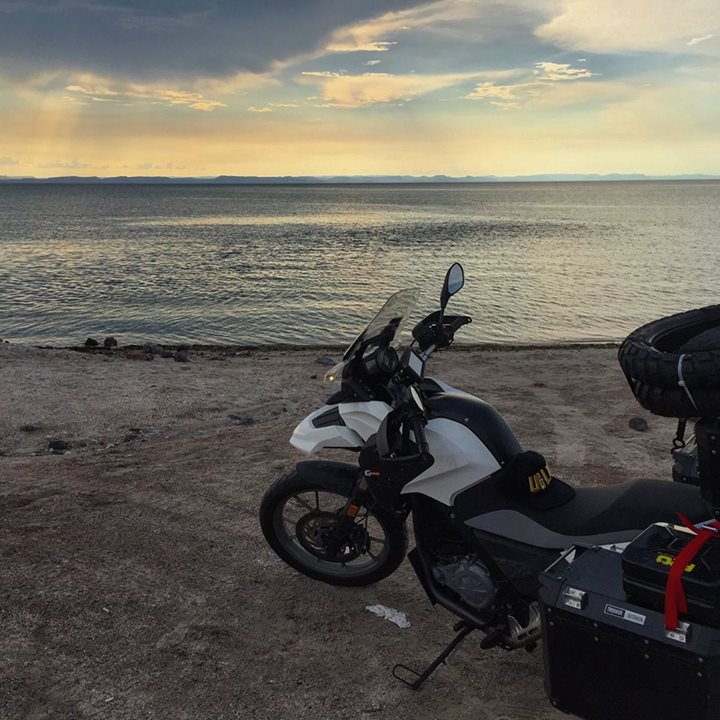 So was going to right a journal on my trip even had my mom go out an buy me one but then i thought what good is that to keep everything a secret or to myself like who reads books as it is so figure i would do this blog thing again like i did years ago when i first went overseas. Soooo here we go its the first 4 days of my adventure south from Los Angeles to Buenos Aires.
OKAY first off guess i should tell u the truth i didnt actually even ride from LA to San Diego so lets start out with honesty we loaded my bike up in my boy Rockys truck in corona headed south to pick up our friend David like a hour from rockys house grabbed him drop some money off at the bank an grabbed some road sodas made it to SD so i can get a clutch lever for my bike in case i break mine. Got some last min shit rocky felt like i need at wal-mart fuck if i didnt know any better i actually think he was coming with spent 254 on small shit i dont even know how that shit added up to that much but got it none the less. Unloaded the bike packed it with all the new shit
<div class=”mceTemp”>

</div>
figured out how to mount the spare tires an gas tanks and then off we went to San Ysidro. Met them there dragged them across the border to party with me cause im good at that. So i drove across and met them in TJ aka tijuana… ( so technically i drove from sd not la) had a blast of night in TJ ate some street tacos if you never been you would never understand what a good taco taste like. Went to some bars went to some strip clubs (duh thats what guys do bachelor party bday party going away we find ourselves at a strip club) I kept them out till 4am they walked back across the border i walked back to my hotel in TJ. Woke up as i was packin my bike had a guy from SD gave me
<div class=”mceTemp”>

</div>
some inspiration hes always wanted to do the trip himself an has drove the baja several times told me places to go to and check out along the way. Incredibly nice guy that we exchange some twitter contact an said if i need anything let him know he can buy it in SD an have it mailed super cheap out of mexico So 2 hrs later im loaded up an off i go to Ensenada to grab some lunch. Get there an while im eating more tacos a old sun wrinkled white dude on a harley pulls up an starts bullshitting with me he retired down there in ensenada but originally from phoenix. So he to gives me some motivation as well being its my first day an after dealing with things back in the states these two random strangers have put that smile back on my face an have me leaving ensenada with excitement an goose bumps. I make a 7hr drive south 3hrs short of my destination but have a sleep at a rv park for 10dollars. Wake up the next morning grab some amazing breakfast but yet shit my lungs out shortly later i think it might be from the party in tijuana night before eh can do nothing but look back in that shitter an smile that was one hell of a night right there.. Load the bike back up an head south to my original first day destination of Guerra Negro I got maybe a hour down the road and i realize what the hell my spare tires are gone an inside those tires was my backpack. Me thinking the worst like fuck thats all gone and inside my backpack is pretty much all my electronics. I turn around an mob it back searching the roads mainly for my straps then i figure i could find my tires an bags i make it 20 mins backwards an run up on this old trucker guy who is just sitting on my bags no idea what he is saying but got the idea he said he saw me in the distant after i passed him an not much longer he saw the tires coming off rolling down the hill aka MOUTAIN. I have no idea how far he walked down the mtn cause majority of it all was fucking steep. He help me load them back up and ghetto tie them down with a 12ft long
<div class=”mceTemp”>

</div>
ladder strapped that i wrapped several times directly behind me so now im sitting up against the tank tighter not exactly that comfortable but figure i get to where i need to go an figure it out from there. I toss the guy 20 bucks thank him mucho gracias and off i went to the guerra negra a small salt flat town. Which was a windy fucking city grabbed
<div class=”mceTemp”>

</div>
some food and then ran to San Agnocia a desert oasis which was pretty wild nothing like the one in peru but a million big ass palm trees everywhere. Continued on at this time im heading east to the sea of cortez trying to make it to the city of Loreto. On my way i got super low on gas 45 miles on E it says it ha came upon this no mans town literally no idea where i was rolled up on this guy selling gasoline out of gas cans he filled me up through him 80 pesos and off i go again. Probably about 5hrs i get tired i pull over an just have seat up aside my bike a dude rolls buy on a honda harley looking thing pulls up honking the horn to make sure im okay i said im bueno he thumbs ups me an rolls off. About an hour later i roll up to this military check point an sure as fuck theres a god damn red headed beard wearing ginger in line on a god damn bicycle. Always got to be that one upper i didnt get to talk to him he took off before me an when i passed him there was no shoulder shortly later i roll up on full rainbow no rain just a fuckin rainbow for some odd ass reason. Finally I
<div class=”mceTemp”>

</div>
hit the coast of the sea cortez came into this town of Santa Rosalia seem like a pretty happening little place an i should of probably ended my day here cause going into this trip i said i didnt want to ride after dark.. WWELLLLLL that ended one day later ha.. So i made my way south to Loreto like planned and arrived at my hotel 3hrs after darkness. Which is not a big deal like most people think but these roads are incredibly windy no lights what so ever an theres fucking wild cows donkeys goats and horses everywhere almost clipped a damn horse and saw numerous cows just hanging out on teh side of the road. I made it to Loreto around 1030 a 12hr day and probably 10hrs in the saddle. I saw a rv park after i passed it pulled to the side of the road which was a small embankment an fucking forgot to turn the damn ABS off so the brakes stutter an i lay the fucker over.. 17hrs later got my first layover ha.. Lift that fucker back which i didnt realize was that god damn heavy and to the rv park/hotel got a room for 20$ with AC cause after a hectic day i wanted a bed. Day 3 woke up packed the bags had a short 3 an half hr trip to my final destination of La Paz. The roads to here were extremely flat an straight and my gps said i was avg 70 including stopping for gas twice before i got to town so made it a little under 3hrs. Instantly upon arrival i knew americans were here cause as soon as i turn down there main road theres a bright fucking blue wal mart. Already turned off but yet still waiting to get in town an once i did wow was i surprised this place was beautiful super small clean city with yachts from all over (mainly california with a lot of mexico ones but did see peru and gutermala) an people everywhere. I check into my hotel yes got a hotel which was incredibly nice about a mile from the center though for only 48 dollars. Instantly got the gear off of me showered tossed on sneakers boards shorts an tank top an started to walk no more bike for me not right now ha.