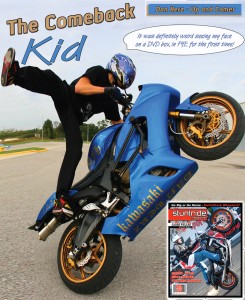 Stunt ride magazine is on the forefront of the core riders mentality in the motorcycle community and  picks up where 2 wheel tuner left stunt riders high and dry.  Stuntride http://stuntride.com/ is run by a great group of people that strive to make motorcycle stunting part of something bigger.  There is no need to sell out and get on their knees for a politically correct method.  There goal is honest and simple, showcase stuntriding, their events and community and not change their whole look to suit the needs of corporate America.

In our last issue we introduced you to some unknown talent out of Minnesota, and this issue we continue to pay tribute to the snowed out states by shoveling out a talented North East rider from Connecticut, Dan Herz.  While Dan has been on the scene for years, he has never really left the impact that would put him number one on your Myspace page.  After taking almost all of 2009 off he has vowed to make his 2010-2011 season one to be remembered by uprooting and moving down to the Stuntshine state (Florida) in order to leave his  footprint in the Stuntride Wikipedia.  Having ridden with the Adrenaline Crew and HAI (Bike shop located in Florida), Dan has had a good support over the past five years.  He has always just been one of those guys who stayed under the radar.  With a new whip and a new attitude Dan looks to be a guy to be reckoned with in the upcoming season. I got a chance to sit down with Dan and pick his brain.  Having known him for almost 4 years we had a chance to catch up and talk about the future.  I learned a few new things about him and we had some laughs over some past adventures.  And now I present you Dan the man in all of his glory! 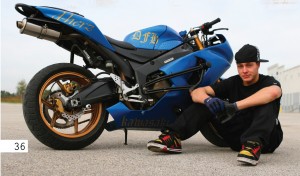 Stuntride: You’ve been around for a while and have always been a good rider, but even without much personal success you have stuck around.  Why is the 2010-2011 season going to be your time?

Dan Herz: It is going to be my year to get my face back out there, and make it to as many events as possible.  After taking almost a full year off i feel my mind is in the right place to really focus on competition riding.  Also, seeing the success of the XDL series has gotten me really excited to get back out there and support the sport and hopefully make it to all the stops.

StuntRide: When you first started to make a name and adventure out of competitions you were riding with the Adrenaline Crew.  Are you still actively riding and doing shows with those guys?

Dan Herz: I was excited to get the chance to do a couple shows at Orange County Choppers earlier this year under the AC name which was a lot of fun.  Other then that I’m around if and when my services are needed.

StuntRide: Kenny Kelley (unofficial leader of Adrenaline Crew) has been at the forefront of the party/stunt riding scene since the beginning.  Was there a lot of pressure to be out partying your brains out instead of concentrating on your riding?

Dan Herz: Never one to be threatened with a good time, I didn’t notice the pressure if there was any.  Besides I’ll out party Kenny and day… 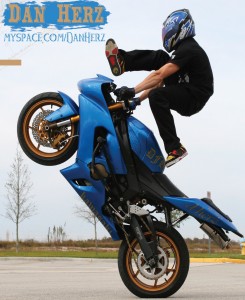 StuntRide: How did riding with one of the most commercially successful riding groups affect you? Did you feel any pressure knowing that the videos you were filming for were going to be in Best Buy?

Dan Herz: Nope, didn’t feel any pressure.  I just do what I do and that’s it.  If its good its good, and if it’s not it’s not.  It was definitely weird seeing my face on a DVD box in FYE for the first time though.  The Adrenaline Crew experience was a whole I believe affected me in a positive way; it taught me to have confidence in my riding and e myself.  Something in my opinion a lot of people have trouble with.

StuntRide: Bringing it back to the beginning, what got you into stunt-riding and where did your love for motorcycles come from?

Dan Herz: Ever since I was a strapping young boy I was fascinated with motorcycles. I seriously believed that people bought street bikes for the soul purpose of doing a wheelies.  Unfortunately my parents were quite anti-bikes, so it took me until I was 15 y/o when i had saved up $500 and bought my first ever bike, a clapped out 1987 Honda Hurricane.  I started doing wheelies and standing on the seat on that bike, and at the time had no idea what “stunt riding” was.  Fast forward a couple years and at age 17 I got a GSXR 750 that I rode to the local bike night in Hartford CT, where I first witnessed the CONMEN riding and doing real stunts.  I was amazed at the circle wheelies and bike control that Mike Doyle (RIP) and Andy Gobille possessed, and i was immediately hooked.

StuntRide: How did you continue to push yourself and learn new tricks? Was there someone to blame for teaching you all the newer tricks?
Dan Herz: While I can’t say that there is anyone to “blame” for teaching me newer tricks, I can say that one of my early stunt partners helped instill a good practice ethic that I still use to this day.  I was lucky to have an “OG” stunter living in my hometown, and he kind of took me under his wing (you know, in the weird way a priest takes an alter boy under his wing) and taught me a lot of the basics, and really got me started in learning harder bike control tricks.  I owe a lot of my riding to Carmello Vasile.

StuntRide: Describe what it was like for you in a state that is more known fro snow then stuntriding?

Dan Herz: It can be frustrating at times, especially when its dumping snow and I know my friends in Florida are happily stunting away in t-shirts.  I’ve definitely had to do my fair share of riding in sub-freezing temperatures.  However I’ve been hardcore into snowboarding as well since I was young, and pursuing that is usually how i would survive the harsh CT winters. 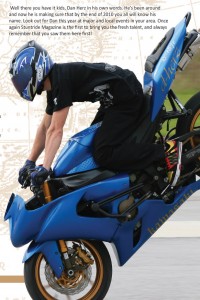 StuntRide: Did you have some idols who you have watched and tried to mimic there style? How did they influence you to become a better rider?

Dan Herz: I try to mimic Adam Lambers style; he was always my favorite idol. He influenced me to become a better rider by wearing make-up and guy liner…thank you Adam.

Stuntride: Why did you decide to take time off in 2009? Were there personal reasons of was it just a cast of being burnt out?

Dan Herz: I suppose a little of both. I have never been a one-hobby man, and after devoting a good chunk of the few years before 2009 to stunt riding I felt it was time to pursue something else for a while.  That something else happened to be music and the band my friends from back home and I started.  We did pretty well for a while; we played a lot of shows and still have a decent fan base back home, and most importantly we had a ton of fun.

StuntRide: After recently breaking your thumb you seem to be really motivated to ride again.  Where’s all of this motivation coming from?

Dan Herz: injuries are the worst thing and the best thing at the same time.  All this down time has caused a lot of energy to build up inside of me.  I know I am nowhere near as good as I could be and can’t wait to get back in the sea, especially after seeing a lot of guys that are out there killing it right now.  Nothing motivates me more then seeing someone else murder it!

Stuntride: Anyone you would like to get out and battle in the parking lot?

Dan Herz: Luke Duke and Bubash, but only if I’m having a good day!  Seriously though, Bubash needs to be taken out in the next ‘last man standing event’ we’re both in (he took me out at Baltimore’s Bike Bash, and I did not forget!). I do have a lot of respect for both of their riding.

StuntRide:  You plan to ride XDL for the 2010, 2011 season.  After not qualifying for a major competition in your life, what makes you think you have what it takes to complete against the best riders in America?

Dan Herz: I’m really arrogant and have a huge ego…haha just playing.  It would be an honor to ride next to some of these guys, and if I show up to the first even and get walked all over it’s only going to motivate me to ride harder and smarter.

StuntRide: Being sortof an unknown rider yourself, who do you think is out there killing it and getting no love?

Dan Herz: Stunter13. Granted, he is getting some attention now and will most likely be doing big things in 2011. I feel like its been a long time coming fro Rafal, and he kills it. 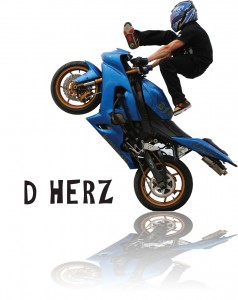 StuntRide; Where do you see yourself and your motorcycle in 5 years?  Hanging out in a salvage yard or still clutching it up and pushing the limits?

Dan Herz: Definitely still clutching it up, and hopefully still pushing the limits.  In 5 years I;ll be 28, and there are plenty of guys at that age that are killing it.  If it works out hopefully by that point I won’t be scraping for change just to get by, and if doesn’t work out I will still be riding even if I am pursing other avenues of entertainment.

StuntRide: Here’s your chance to shout out to any and all that have helped you. Don’t forget all the little guys!!!

Dan Herz: Big ‘ups’ to HAI and all they have done for me.  Thanks to T-ice for bringing me back to the Stuntshine state, big shout out to all my boy’s back home riding in the frigid temps!  You know who you are!  And thanks to all my friends, riders or non-riders, that have supported my need for speed.  Also thanks to Kenny from AC for giving me opportunities I otherwise would have not had the chance to be involved in, and finally Carm’s Cycle Addiction for his past support.

–Well there you have it kids, Dan Herz in his own words.  He’s been around and now he is making sure that by the end of 2011 you all will know his name.  Look out for Dan this year at major and local events in your area.  Once again Stunt Rider Magazine is the first to bring you the fresh talent, and always remember that you saw them here first! 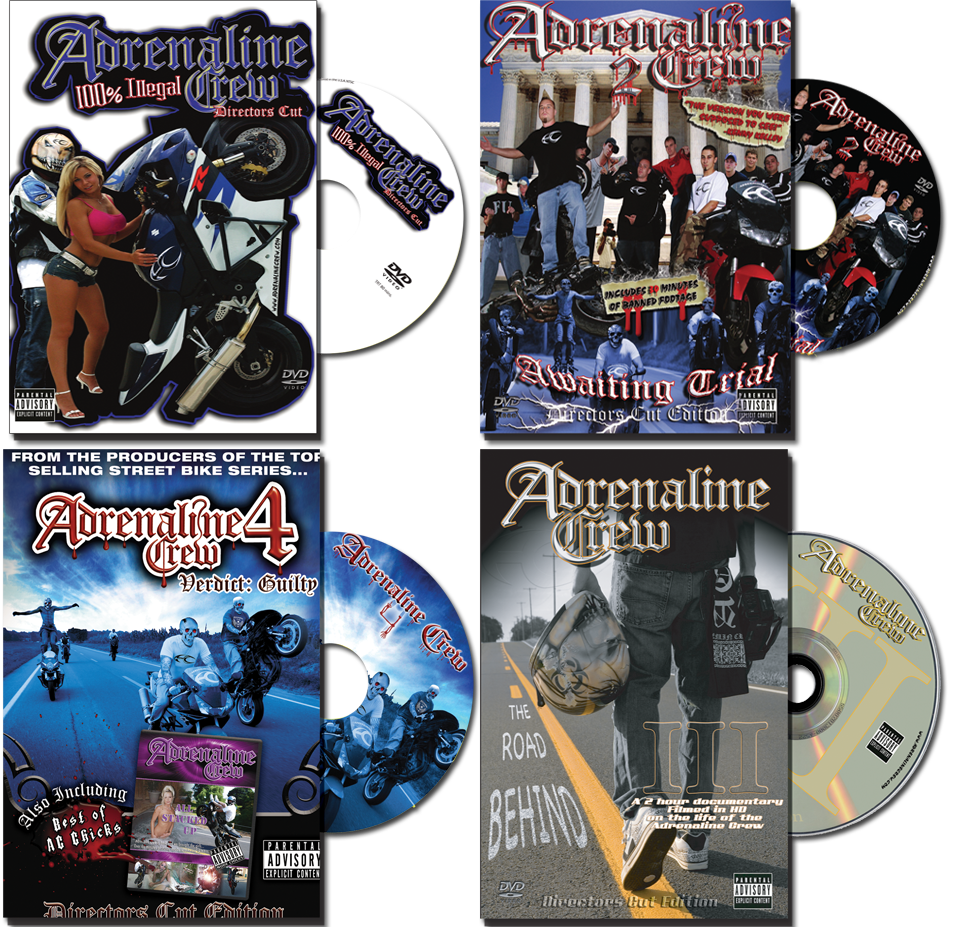