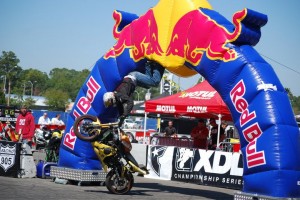 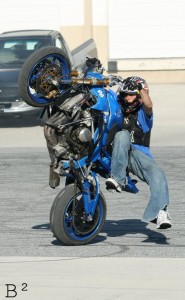 Daytona Beach’s Bike Week has been known for a few things in the last few years.  Dying Harley attendance due to the gas prices and travel expenses, Attendance at the Daytona 200 to shrink, and for the Adrenaline Crew stunt shows and XDL Stunt Competition to bring the new generation of Japanese influenced motorcycle riders to the 70th year running Bike Week.  Where the Harley scene seems to be dying out, the street bike scene is filling in, not only caring on the old traditions of partying on Main Street, (where the Adrenaline Crew has hosted its own shop for the last 7 years) but creating new ones too, like day rides and the XDL. Unlike the stunt shows the Adrenaline Crew does at the flea market, which is more for entertainment for Jam On Production’s “Largest Bike Week Swap Meet”, the XDL is all about street bike stunt riding.
The Adrenaline Crew was there and showcasing the new line of AC gloves.  The motorcycle gloves they gave out to the crowd and their riders wore are light weight and breath easily for show and lot styled riding.  Dave Boyd, and Dirty George rocked the gloves, Dave in the Pro class and Dirty George winning the circle wheelie contest and sickest trick.  His trick was doing a wheelie under the Redbull sign and mule kicking it while still on one wheel as pictured here. XDL is a event series that travels all over the US and does a pro class and amateur.  For more information check out www.stuntride.com 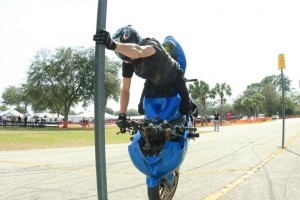 At the Daytona Beach Flea and Farmers Market Dan Herz and Joe S. tested out the best AC motorcycle gloves while doing the AC stunt shows.  Unfortunately Dan’s bike broke while loading it on the truck so he was MIA the rest of the week, but fans still got to ask him questions, just not see is flawless riding.  All night the crew went out on the strip ironically called Main Street partying with their friends and trying to get more and more people to know about the street bike events that have been taking over Bike Week. 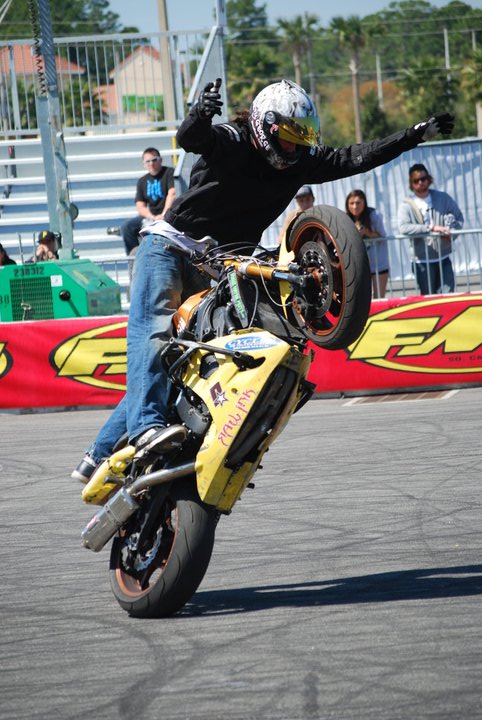