FHM article how to wheelie Motorcycle with pictures

The Adrenalin Crew give a crash course in stunts 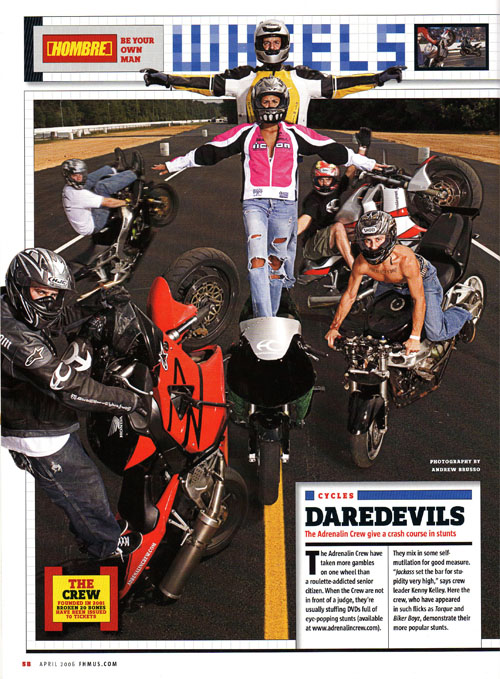 The Adrenalin Crew have taken more gambles on one wheel than a roulette0addicted senior citizen. When the Crew are not in front of a judge, they’re usually stuffing DVD’s full of eye popping stunts (available at www.adrenalinecrew.com).

They mix in some self-mutilation for good measure. Jackass set the bar for stupidity very high.” says crew leader Kenny Kelley. Here the crew, who have appeared in such flicks as Torque and Biker Boyz, demonstrate their more popular stunts.

Trying the tricks will either make you a lot of money, or have you chased by local law enforcement.  The Crew founded in 2001, broken 20 bones, have been issued 70 tickets.

The Adrenalin Crew show off the modified tools of their absurdly dangerous trade.

Kenny Kelley;s 2003 Honda CBR 954- The front end comes up with no effort whatsoever. Its got a 12 O’clock scrape bar so you can bring your wheelie back past the balance point. It helps so you don’t slip backward and ruin your tail.

Greg McGylnn’s 2004 Kawasaki 636- I replaced the crash cage. The last one took 15 hard crashes. It was steel tubing that was bolted onto the engine mounts of the bike to protect the engine case cover from getting smashed.

Steve Pullman’s 2001 Suzuki GSXR 750- Adding teeth to the sprockets gives you more torque for slower tricks. With the change in gearing, my bike would probably do only 1100 pmh. Out of the factory, it probably goes 170 mph.

Thew Blankstrom’s 2000 GSXR 750- I’m on my fifth or sixth motor, my second frame, third front end and all the other parts that go with it. I have no lights, no gauges You beat the tar out of it, and the crowd loves to see it!