Daytona – Ride with the Adrenaline Crew feature in Stuntride Magazine

A PLACE OF THEIR OWN

It’s often a gamble when riders pack up for Daytona’s Annual bike week Will there be a break down with the bike? Will the cops be obnoxious this year? Will the weather hold out? Add all of those possibilities in with the struggling economy (because who hasn’t used the recession as an excuse lately?) and you have what adds up to be the worst possible scenario for a successful bike week.

However, Kenny and the Adrenaline Crew riders wouldn’t hear it. As a strong cold front came in days before Bike Week kicked off on February 28th, sending central Florida into temps ranging in the 40’s and 50’s with the winds making it even colder, the   on and kept performing. With riders from all over the country including as far away as Boston and Maryland, they braved the harsh winds to provide a day long show for the spectators at the Daytona Flea Market throughout the week in their 5th annual Flea Market Show. 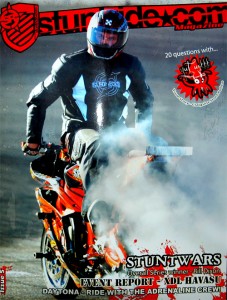 As the week continued on, the crowds crew and the weather warmed up to a gorgeous couple of 8- degree sunny days and the riders brought out some great performances with a mix of old school and new acrobatics including lots of hand stands, and a watermelon busting target stoppie on the last day by Daytona local Sean Parrish on his green and black F4i.

Mike Jones held it down with some rolling handstands on his black street fighter 636, and Kurt (aka Turtle) and Gerry (the Gorrila) both held down some drift action on f4i’s while EJ (Ace) mastered the slow circles without an upper on his red 636 after a slight mishap on the first day.  The guys held down a strong variety of stunts that were both fast and slow, bringing wheelies and stoppies galore and enough tricks and continuous riding that would make even the most hardcore Harley riding, sport bike hating, leather clad biker bad ass stop and cheer like a six year old.

The Adrenaline Crew riders, including newest member Sean Parrish, welcomed non-crew members to rider from local teams including Boss Stunters and Cycle Ops.  Boston based Barley Legal Stunters who also made the trip to support their Adrenaline Crew team members Mike Jones and Gerry. Some well known riders made appearances to hit the pavement and have some fun. T-Neck, Poppa Willie, Duddy, and Tony L all stopped in to say hello and throw down a few tricks with the guys. 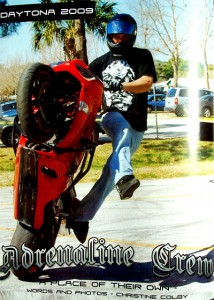 Although there weren’t any catastrophes or major injuries with the riders, a few of them were plagued by ongoing issues with bikes that had been sitting all winder. It led to the usual stunter riding style: ride….ride….stop and fix something. Ride….ride…stop and fix something.  Turtle had to spend a portion of one day cleaning out an oil filled air box, and all of the riders at one point had to spend a little while repairing a blown tire. Those tires had a way of just letting all of the air escape (usually through a split center seam around the whole tire). Must have been something in the pavement. Or perhaps it was the insanely smoky burnouts that drew spectators over like moths to a porch light!

Through the week the riders rode incredibly hard at the Flea Market all day, but it didn’t stop at when they packed up and left at the sunset. Kenny and the boys found themselves scattered 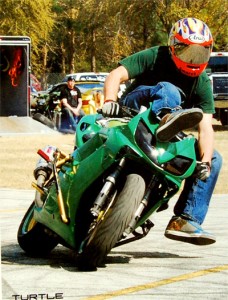 around central Florida at a number of events, and also checking out the local scene. Among the nights were events including the Girl’s Gone Wild Night at The Barn, a country-western nightclub located in Sanford, Florida. Later in the week the guys also made appearances at parties in Daytona Beach. Friday night the crew came out to support Kane and Monster Energy Drinks at Red Tails Bar and Grill, located on South Beach Street in Daytona. The guys had a chance to relax during the parties, shooting a couple rounds of pool upstairs before heading out to the patio location for some live music, drinks and socializing with the Monster Energy Girls, and a stunt show put on by Kane. Saturday night brought a close to bike week with the Coliseum (also located on Beach Street in Daytona) hosting a huge sport bike party organized by Maravilla Productions with guests including Gixxie, Kane and Michael Jordan and a bike show inside the club. Each night, the riders also checked out the scene at Daytona’s famous main street and found a couple cold drinks waiting for them at a favorite location, Nascar themed “Crusin” on the corner of A1A and main street. 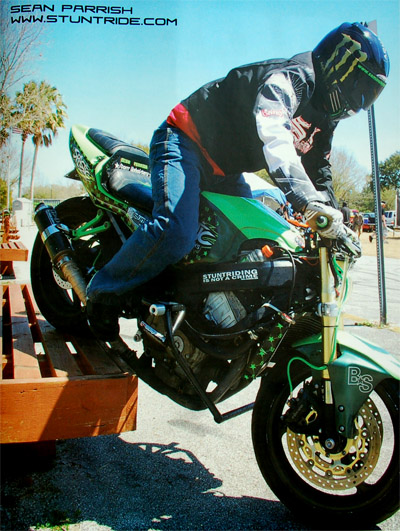 Saturday wrapped up a successful Daytona Flea Market show with some special filming for the next Adrenaline Crew DVD, including some tricks that involved some pretty tricky filming, with Kenny laying on the hood of his Avalanche while riding down the street to be able to get just the right angle. Now if that isn’t dedication to his DVD production, I don’t know what is!!! Although the dedicated riders all sported some nasty head colds due to temperature changes and ugly tan lights from riding all week in the Florida sun, it was smiles on everyone as they packed of their bags. Some riders had flights leaving as soon as two hours from leaving the flea market to head back to some not so friendly riding weather up north, and there was definitely some dread in going home after getting a taste of riding again after a really harsh winter up north. Discussions were already in the works for Biketoberfest, and plans were underway even before the official close of the 2009 Bike Week. We will see what Kenny and the boys can come up with in the fall, but you better believe you will want to be there to see it in person.