Bike Magazine one page article on a motorcycle stunt picture

Reckless Steve from the US stunt team, the Adrenalin Crew is using his unique vantage point to look out for traditional Amish hours and carts that frequent Maryland’s Budd’s Creek. It’s a safety thing, officer. American street stunting is breaking cover from the back alleys and nocturnal business parks and starting to receive mainstream interest. “They who scene has just exploded in America in the past 12 months”, says the Adrenalin Crew’s Ken Kelley. “We’ve just re-released our latest video -100% illegal – after Warner asked to publish it.” 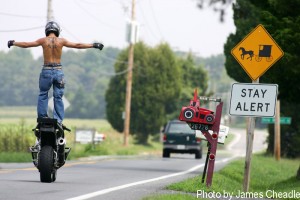