ADRENALINE CREW 4 IS LOCATED AT THE FOLLOWING STORES, OR YOU CAN CLICK THE LINK AND ORDER ONLINE NOW! 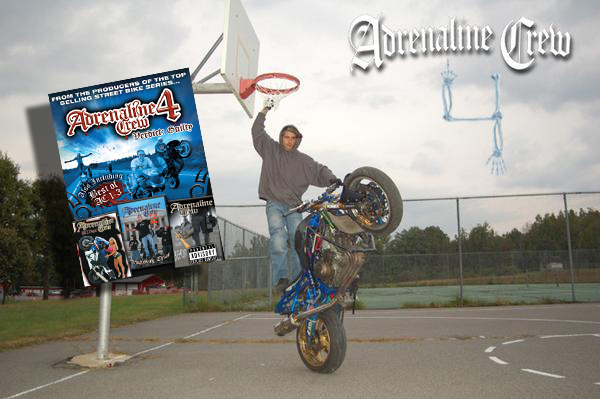 It seems like it was almost over, the carnage the Crew had created cost them their vehicles, their licenses, their freedom and almost their lives.  Now after the smoke clears and the probation is lifted Kenny Kelley and the Crew are back where they left off, doing real live stunts on our nations roadways.  These real action dare devils have no permits, arn’t part of a union, just on pure Adrenaline while terrorizing the streets of America!

Part 4 reminds us of the good old time we had filming Adrenaline Crew 1.  It was back to having fun, no pressure, no bullshit, no fake ass friends.

Adrenaline Crew 4 Verdict Guilty Directors Cut features the FULL Arena Legal DVD and Chicks DVD as a bonus! Its like 3 DVDs in one!

A few familiar faces are back including Randy the Redneck, he has been lured by Robert of Adrenaline Crew over to their house for what he thought was a chance to meet the motorcycle riders in person.  Ken Hanson of Underage Dateline has other plans and paints a dark picture of our friendly redneck.  Here is a clip from that scene.

Adrenaline Crew 4 “Verdict Guilty” a step beyond anything you have seen in motorcycle stunts. 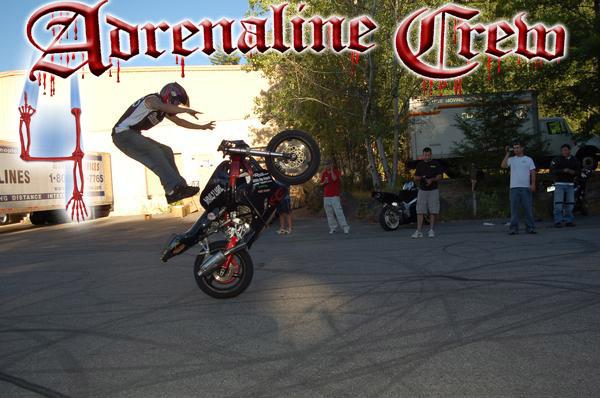 The motorcycle stunts you will witness in this movie are above and beyond anything you have ever seen, including a ghost wheelie, and stalling the motorcycles in a wheelie and grabbing on to objects like Dave Boyd in the top picture.  The amount of girls has been increased and there is no censorship! This was always something Kenny Kelley hated. “I would always hate for people to see our movies and ask why some scenes seem cut or blurred, this DVD i did not compromise, you see EVERYTHING!” The picture to the left is Mike Mehaan jumping off his bike mid wheelie only to run behind it catch it, and jump back on!  The level of extreme in this flick far surpasses anything we have ever done. 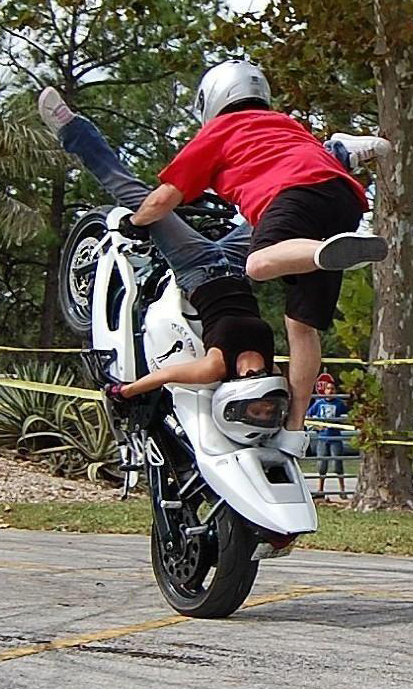 the fluid (its really just pancake syrup) down the drains. Some attendants freak out and call the police while others encourage our undercover camera men to dump on the grass or even in the trash…silly morons!  Footage from  Adrenaline Crew motorcycle rides from all over the US filmed in high definition layer this DVD.  We have also upped the antis for paying people to do ridiculous things, now up to 500 bucks we have one guy who goes down a 2 story trash shoot naked, only to land on the cinder blocks the Crew placed for him. There are a few painful motorcycle wrecks and jackass type behavior you have come to expect from us.

Footage from the Adrenaline Crew shop in Florida is included, as well as Tattoo Dan and Willis tattooing away on numerous fans and girls.  There are some special guests you will see and a killer soundtrack from bands like Throwdown and Blackened (featuring members of Hatebreed) and Sev!

The quality level has gone up and so has the level of energy, these guys keep getting sicker and sicker, friend Bill Dixon does a wheelie facing backwards while Turtle drifts his bike through parking lots.  Greg is back killing it as usual and a host of new blood shows off their stuff for you.

In another skit Robert dedided to steal a friends car, only to grab the Crew and film them racing back and forth through speed cameras.  We put up a clip located below.  Poor Irwin had to witness his car getting multiple tickets without being able to anything to stop it!

The Adrenaline Crew know the outcome of their destruction, they know the price they will have to pay, but its all worth it for your entertainment here on AC 4 “Verdict Guilty”.  In stores everywhere January 16th 2010!